Often, when the Bible talks about or introduces a prophet or someone else of importance, it does so by referring to their lineage – usually their father (Isaiah “the son of Amoz,” Jonah “son of Amittai,” James and John  “sons of Zebedee”). But Micah is introduced as Micah “of Moresheth” (verse 1), otherwise known as Moresheth-gath (verse 14). Moresheth-Gath was a town in Judah’s Shephela – a lowland region in south-central Israel. It was captured by Sennacherib in 701 B.C. 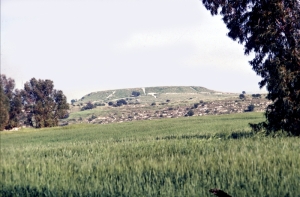 A mound, or tell, of Maresha, one suggested site of Micah’s hometown Moresheth.

Verse one lists the kings of Judah during Micah’s time (Jotham 750 – 735 B.C., Ahaz 735 – 715 B.C., and Hezekiah 715 – 687 B.C.). This means that he was around roughly at the same time as Isaiah and Hosea. But since Uzziah (767 – 739 B.C.) is not listed, we can be fairly certain that he prophesied during the latter half of that century. He was from the southern kingdom, but prophesied to both the northern kingdom (Samaria here) and the southern kingdom. The message was of the same problems some of the other prophets spoke about – idolatry, of course, and social injustice (the rich oppressing the poor usually).

Assyria’s power was ever-increasing, but Israel was not economically affected during the first half of the eighth century. In fact, a wealthy upper class became increasingly prevalent. And along with them came more idolatry and more oppression of the poor. Then comes Ahaz, who was nothing more than a puppet for Assyria, followed by heavy taxes by the state of Assyria, which led to even more oppression of the poor. Micah’s message was that doom was coming. But he did offer hope in that there would ultimately be a restoration. He would have been there for the saving of Jerusalem from the Assyrians under Hezekiah (2 Kings 18-19), as well as for the ultimate defeat by the empire

In chapter 5, Micah brings the prophecy of a ruler to be born in Bethlehem – a town nobody would have considered important. Micah 5:2 is cited in Matthew 2:6 and John 7:42. The abiding theme of the book is of judgment and of salvation (compare chapter 2 with chapter 5). It is about a God who keeps His promises – even those that say He will bring destruction on the wicked if they do not repent. And it is about a God who is both a king and a shepherd, and will forgive and restore a remnant. But that king will exercise vengeance on the nations that do not obey (Micah 5:1-15).