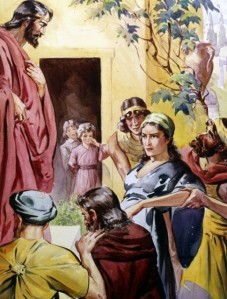 Before Saul became Paul, he persecuted the Christians, putting many in prison and even having some executed — Acts 8: 1-4.

The chapter opens with the statement that Saul approved of Stephen’s execution, and that from that day forward there was a great persecution against the church in Jerusalem.  And Saul was right in the thick of it, dragging men and women out of their homes and putting them in prison for their Christianity.  This was Saul’s darkest hour, and he would later have great sorrow for it.  It was a dark time for Christians in Jerusalem for sure.  But the scattering throughout Judea and Samaria described in verses one and four was not without a positive gain, as those people continued preaching the word in new places.

Philip went to Samaria healing the lame and preaching the “good news about the kingdom of God and the name of Jesus Christ” (verse 12); and he baptized many new Christians.  When the Apostles at Jerusalem heard about this reception, they sent Peter and John there to “lay hands” on some of them, so that they would receive the Holy Spirit.  Those Christians would have the power to perform miracles and signs as Philip did, but only through the Apostles could this happen.  Simon the magician’s conversion seemed genuine, but his heart was not in the right place.  But Peter’s rebuke of him for trying to buy the gift of God seemed to evoke the right response (verse 24).

Then, an angel of the Lord came to Philip and told him to go south to a “desert place” to the road that goes from Jerusalem to Gaza.  There he met an Ethiopian, a court official to their queen, Candace.  He was reading from Isaiah.  The scripture he was reading in verses 32-33 is from Isaiah 53:7-8.  Philip told him that the passage was about the Christ, and told him “the good news about Jesus.”  As they came to water, the Ethiopian asked to be baptized.  After doing so, Philip was carried off, and found himself at Azotus (the ancient Philistine city of Ashdod).  From there, “he preached the gospel to all the towns until he came to Caesarea” (verse 40).

The significance of the story of the Ethiopian’s conversion was more than to teach us about the power of God’s word, or even to instruct us more about baptism.  Philip was doing very well with conversions and could have stayed where he was doing the same.  This demonstration of the providence of God in sending Philip to this one soul in this remote location was for the Ethiopian to continue back home and further the kingdom there.

Side note: In Philip’s time, Caesarea was the seat of Roman government in Judea.  Excavations there have provided significant discoveries.  The following link to BiblePlaces.com contains some highlights and photos.

One comment on “Acts 8 – Philip and the Ethiopian Eunuch”