Before the Sanhedrin, the Jewish council, Stephen gave a stirring sermon about Jesus. For this, he was stoned to death, becoming a martyr for Jesus (Acts 7:1-34).

Chapter 7 opens with Stephen at the Sanhedrin being asked by the high priest “Are these things so?”  The charges against Stephen from lies and twisted quotations of Jesus were that he “never ceases to speak words against this holy place and the law,” and that they had heard him say “that this Jesus of Nazareth will destroy this place and will change the customs that Moses delivered to us” (Acts 6:13-14).

Did Stephen, full of the Holy Spirit, already know the fate that awaited him?  Perhaps.  The possibility must have been obvious.  He does not actually address the charges against him, which hints that he must have known that such would be pointless. Instead, the speech that follows is a long account of the history of Israel, their continued blessings given by God, and their rejection of the Lord time and time again.

The Spirit brought him to full remembrance of the Scriptures in this account; and he concludes in verses 51-53 with a direct accusation on his own accusers.  He first quotes God’s own description of their forefathers as stiff-necked people (Exodus 33:3), uncircumcised in heart and ears (Ezekiel 44:7).  He goes further though, first referring to their father’s having killed the prophets, as Jesus had spoken in Matthew 23:29-31,37.  Then he turns the tables on them completely – charging them in verses 52-53 with the murder of “the Righteous One, whom you have now betrayed and murdered, you who received the law as delivered by angels and did not keep it.” 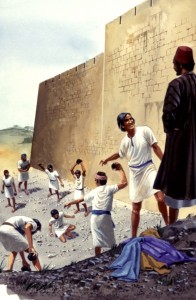 Saul watches approvingly while men stone Stephen to death (Acts 7:35-60). Later, when Saul became Paul the Apostle, this scene must have given him great sorrow and remorse, deeply regretting his part in Stephen’s martyrdom.

This indictment by Stephen of these men was received with so much rage that mob rule prevailed.  Stephen was taken from the city and stoned to death.  The Jews who had no legal right to execution under Roman law nevertheless had it carried out with haste as their anger burned.  In verse 58, the so-called “witnesses” cast the first stones, according to the law (Deuteronomy 13:9).  These laid there garments at the feet of young Saul of Tarsus (stoning was hard work, and the outer garments would be in the way), who stood by and watched, as Stephen was killed.  The vision Stephen had in verse 56 of Jesus at the right hand of God was undoubtedly for his own encouragement.