This week, we will read first about the crucifixion.  Then we will spend the rest of the week with some details of the time after the Lord’s resurrection from the perspective of the gospels of Matthew, Luke and John.  We know from 1 Corinthians 15:5-9 that Jesus appeared to more than five hundred in the forty days before His ascension to heaven.  We will focus in the next few days mostly on the time from His appearance to the disciples onward.  Today though, let us spend a bit of time on the first hours of the day of His resurrection. 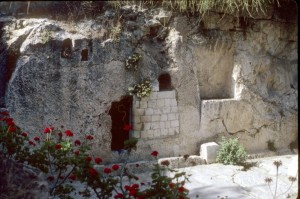 The Garden Tomb in Jerusalem, one traditional site of Jesus’ burial. It is safe to say that it is not the tomb of Jesus, but it is useful as a realistic example.

We need to keep a few things in mind.  First, as is often the case with the Scriptures, events recorded in the four gospels are not always in chronological order.  Also, as we have discussed before, each of the four was written to a different audience; and we find things phrased differently, as well as additional events in one gospel not found in another.  Finally, we have seen time and again that there are some things we would like to know that the scriptures just do not tell us.  In this case, the commentator James Burton Coffman says it best: “…it was part of the Father’s wisdom to give men just the amount of revelation which would leave them free to make their own moral decision. ”

The resurrection accounts of the gospels are favorite citations for those unbelievers who feel compelled to invest their time trying to find alleged contradictions.  Of course, such allegations are baseless.  Putting the four gospel accounts together gives us a more complete picture of the events of that great morning.  For a complete comprehensive and easy to read harmonization of the four gospels, I recommend the following book (also available in Kindle format): “The Fourfold Gospel” by John McGarvey (ISBN-10 # 1936341018, ISBN-13 # 978-1936341016). 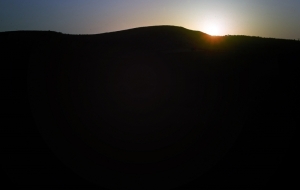 1.  Several women came to the tomb of Jesus before dawn on the first day of the week (Sunday) with spices to anoint His body.  From the four gospels, we know that group included at minimum Mary Magdalene, Mary the mother of James (Jesus’ mother), Salome, and Joanna.

2. The Sabbath ended at sundown on Saturday.  The key sentence in Luke 23:56 is that on the Sabbath, the women “rested according to the commandment.”  This means that they would not be preparing the spices and ointments until the Sabbath was over (at sundown).

4. There was a great earthquake, and an angel of the Lord descended from heaven and rolled away the stone and sat on it.  The fear that brought to the guards is stated – along with the statement that they became like dead men.  Perhaps they were just paralyzed with fear, or perhaps they were made unable to move.  We are not told.  The point is that the seal was broken, and the stone would not be allowed to be moved back in front of the tomb. 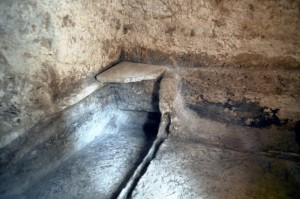 The Garden Tomb in Jerusalem, one traditional site of Jesus’ burial. It is safe to say that it is not the tomb of Jesus, but it is useful as a realistic example.

5.  At this point, we know from John that it was Mary Magdalene who ran to tell Peter and John that (as she believes) someone has taken the body.  John and Mark both indicate that Mary had left the other women.  While she is gone, two angels speak to the women she had separated from, telling them that Jesus had risen and they must tell the disciples “and Peter” that He is risen and that they must go to Galilee. Many of the guards leave to go tell the Sanhedrin what has happened, while the other women leave to find the disciples.  It is important to get word to all the disciples.  But Peter is mentioned separately probably because it is important that in his grief, he does not think he would be cast off because of his denial (in Matthew 26:69-75).

6. Peter and John run to the tomb and eventually both go inside and leave, satisfied that Jesus is gone.  John “believes” but Peter is puzzled about what happened.  They went back home and the other women would come tell them (as well as the other disciples) what the angels had said to them.

7. Mary, back at the tomb weeping after Peter and John had left, now looks into it for the first time and sees it empty except for the angels – sitting at the head and foot where Jesus had laid.  Perhaps from her tears blinding her or perhaps prevented from truly “seeing” (as with the disciples in Luke 24:16), she does not react to the angels or recognize Jesus until He calls her name (John 20:16).  Jesus tells her not to delay by clinging to Him, but to go to tell the disciples that He is going to His Father (and their Father).

8. Mary does go and tell the disciples that she has seen the Lord.  The other women are met by Jesus on their way (Matthew 28:9); and they are allowed the delay briefly, as they take hold of His feet and worship Him.  Then He sends them to continue on to the disciples as well.

Each weekend, I am now posting a small PDF of one week of chapter summaries (on the website’s “Summaries” page), current to the beginning of the previous week.  I have posted the summary for Week 36 (September Week 1) of the schedule I am following.  This short PDF document contains condensed comments about John 12, Matt 24 and 25, John 13, and John 14, with hyperlinks to the ESV version of each chapter for listening or reading, and joins the summaries for other weeks already posted there.