Having read John’s account, we now move to Matthew’s account of the last supper and Jesus’ arrest.  Since the audience of the gospel of Matthew is the Jews, it makes sense that he would give full attention to certain details of the trial before the Sanhedrin.  Unlike John, who gives the event in more chronological order, Matthew includes the account of the anointing of Jesus by Mary (sister of Lazarus) here in verses 6-13.   he also gives us the details in verses 14-16 of Judas’ conspiracy with, and payment from, the chief priests for his promise to deliver Him.  We also read in verses 17-20 of Jesus sending disciples to a “certain man” to prepare to have Passover at his house. 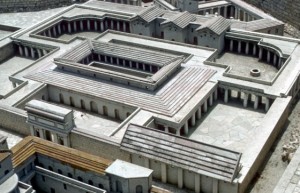 A model of the way Caiaphas’ house may have looked in the time of Jesus. Caiaphas was the high priest who judged Jesus.

But it is in verses 3-5 that we read of chief priests and the elders plotting in Caiaphas’ palace to  “arrest Jesus by stealth and kill him.”  They were fearful of arresting Jesus openly because of His popularity; and the Feast of Unleavened Bread brought thousands of Pilgrims to the city.  The last thing they wanted was an uprising.  In verses 20-25, Jesus foretells His betrayal by one of them, culminating in an actual exchange between Jesus and Judas.  What was it like to be told by the son of God that it would be better if His betrayer had never been born – knowing that you had already begun that process?  And Jesus’ confirmation that He knew in verse 25 must have been chilling, especially after the fact.

In verses 26-29, Jesus institutes the Lord’s Supper.  The Passover, begun so long ago in Exodus 12 with the sacrifice of a lamb had pointed to this day.  Now this memorial would remind us of the sacrifice of “the Lamb of God who takes away the sin of the world” (John 1:29).  Verse 28 (“…this is my blood of the covenant, which is poured out for many for the forgiveness of sins” is the fulfilling also of the new covenant promise of Jeremiah 31:31-34.

The hymn that they sung in verse 30 is most likely Psalm 113-118, which is known as the Hallel (meaning “praise”).  The scripture Jesus quotes in verse 31 is from Zechariah 13:7, telling the disciples that they will all fall away that very night.  He also predicts Peter’s denial, at which point they all declare that they will remain with Him even if they must die.  His prayer in Gethsemane occurs in verses 36-44.  The traditional site for this now holds the “Church of All Nations” (or “Basilica of the Agony“), which was built over a 4th century Byzantine church.  Note Jesus’ sorrow and fervent petition to God in verses 38-39.  Although He was divine, for our benefit He had the same emotions any man would have knowing the suffering that He was about to endure. 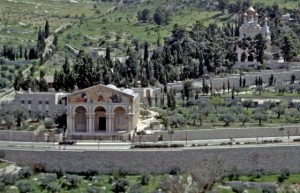 The Mount of Olives, looking from Jerusalem, with the Basilica of the Agony, traditional site where Jesus prayed in the Garden of Gethsemane. Today the garden is at the left of the basilica.

Judas betrays Him with a kiss in verse 49.  We know from John 18:10-11 that it was Peter that cut off the ear of one of Jesus’ captors (Malchus) in verse 51.  When Jesus rebukes him, He says “Do you think that I cannot appeal to my Father, and he will at once send me more than twelve legions of angels?”  (we sing the song “He could have called Ten Thousand Angels”).  Jesus was of course  not going to call for help, but a Roman legion was 6,000 – so twelve of them would be 72,000.  As predicted, all of His disciples fled the scene.

Matthew skips past the meeting with Annas (John 18:12-14, 19-24) and begins next with the appearance before Caiaphas the High Priest and the Council (the Sanhedrin).  They had many witnesses coming forward, but none would give the false testimony they wanted in order to have Him put to death until at last two came and, in verse 61, misquoted Jesus’ actual statement of John 2:19-21.  He remained silent, making no correction,  when Caiaphas questioned Him about it.  But when asked if He was the Christ, He confirmed it with the Greek expression “you have said so” that He had also used with Judas in verse 25.  Then He added that they would see him at the right hand of “Power.”  Caiaphas declared this to be blasphemy, and they spit on Him and slapped Him, saying that He deserved death.  The outcome was assured now.

Peter’s denial in verses 69-74 went just as Jesus had said; and remembering the words of the Lord, Peter’s grief was intense.  Though this apostle would come to understand the necessity of what Jesus was to endure, we can only try to imagine the guilt he would bear.