As David drew near to death, he gave Solomon his final instructions.  The first part, in verses 2-4, contains instructions on how to conduct himself, and on remaining faithful to God.  The words are just as God spoke to Joshua in his charge in Joshua 1:6-9.  The second part contains specific instructions on housekeeping.  Some of this concerned the fact that Abiathar must be dealt with, as well as Joab.  Both had been treasonous concerning Adonijah, and could not be trusted.  Then there was Shimei, the Benjaminite of the house of Saul that had cursed David so grievously during his flight from Absalom (2 Samuel 16:5-8).  David had promised that he would not kill him, but that promise is not inherited by Solomon, so David leaves his fate in Solomon’s hands.  David dies in verse 10; and verse 11 says that he had been king for 40 years.  In verse 12, Solomon’s “kingdom was firmly established.” 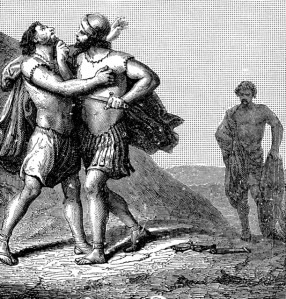 In verses 26-27, Solomon does deal with Abiathar, and he is removed from the priesthood.  As he was in the line of Eli, through Ithamar, this fulfills the prophecy to Eli in 1 Samuel 2:31-33 that his house and priestly line would be done away with.  Joab fled to the tent, grabbing the horns of the altar – thinking he would be safe there (verses 28-30).  But Exodus 21:12-14 makes it clear that is not the case for someone who had done willful murder, as Joab had done in the cases of Amasa (2 Samuel 20:10) and Abner (2 Samuel 3:27).  Solomon commands Shimei not to ever leave Jerusalem, or else he would be put to death.  This was presumably to keep him from returning to incite the Benjaminites to rebellion.  But verses 39-40 tell us that he violated that oath, and Solomon had him killed.

Adonijah had his mother request Abishag for his wife.  But Solomon sees what his mother apparently chose not to.  Abishag was technically part of David’s royal harem.  Adonijah had clearly not given up on his quest for the throne, and likely never would.  So Solomon wisely had him done away with (verses 22-25).