Verses 23-38 of Luke chapter 3 contain the genealogy of Jesus Christ. This genealogy differs from that contained in Matthew (Matthew 1:1-17) in a number of ways. In fact, the differences are so striking that the fact has generated considerable criticism from skeptics, as well as disagreement among scholars.

To begin with, the genealogy in Matt

Luke’s genealogy of Jesus, from the Book of Kells, transcribed by Celtic monks circa 800 (Photo credit: Wikipedia)

hew goes forward, beginning from Abraham to David, then (through Solomon) on down to Joseph. The genealogy here in Luke goes backward – not to Solomon, but to Nathan, one of David’s other sons, and then all the way back to Adam. Clearly, the genealogy presented by Luke is that of Jesus’ mother, Mary.

Surprisingly though, there has been much scholarly resistance to this view, largely because it is Joseph that is named as the “son of Heli (Eli)” in verse 23. But the word “son” is often used quite loosely in the Bible. For example, a grandson, a great-grandson, or any descendant may be referred to as a “son” of a particular person (Jesus was called the Son of David by many – i.e. in Matthew 22:42). Use was made of the word “son” for a son-in-law as well (1 Samuel 24:16), especially where no male heir existed, as is believed to be the case with Mary and Heli. Some scholars explain this also with the significance of the absence of the article “the” (in the Greek) before Joseph’s name in Luke’s genealogy (Godet, Louis. A Commentary on the Gospel of St. Luke Edinburg: T&T Clark, 1893).

The second objection to the genealogy being through Mary’s blood line is that it would be a huge departure from Jewish tradition, where giving genealogies is concerned. This writer sees no problem with that for two important reasons. First, this is a very different genealogy, and the Holy Spirit had good reason for giving a second, very detailed genealogy of the Christ. One might think that breaking from tradition in giving that blood line might be expected, eh? Secondly, the Gospel of Luke (which, incidentally, was written in Greek – not Hebrew) was addressed to Gentiles, not really to Jews (specifically, of course, to Theophilus). Matthew was the Gospel that was written mainly for the benefit of Jews. In light of this, a departure from Jewish tradition in genealogies should not surprise us in the least. Some also see the fact that Luke’s genealogy is through Mary’s line as an answer to the “Jeconiah objection.” As the last king of Judea before Babylonian captivity, Jeconiah was totally rejected by God, and Jeremiah 22:24-30 makes that rejection clear, saying that “none of his offspring shall succeed in sitting on the throne of David and ruling again in Judah.” In Matthew 1:12, we see that Jeconiah is in Joseph’s genealogy, so the argument goes that this fact disqualifies Jesus from being the Messiah. This, of course, is ridiculous because God obviously did not mean that no descendant would ever rule. That would have broken His covenant with David. And just a few verses later, in chapter 23 (Jeremiah 23:5) we get the rest of the story concerning Messianic prophecy:

“…the days are coming, declares the Lord, when I will raise up for David a righteous Branch, and he shall reign as king and deal wisely, and shall execute justice and righteousness in the land.”

Of course, Mary’s line includes a Zerubbabel and a Shealtiel in the genealogy given by Luke. But the Zerubbabel that 1 Chronicles 3:17-19 lists in Jeconiah’s line is the son of Pedaiah – not Shealtiel; and he doesn’t have a son named Rhesa. These certainly appear to be different people. Any internet search engine will tell you that Shealtiel is a family surname for many to this day, and Zerubbabel (meaning seed of Babylon) was likely not the name of just one man either, in light of the exile. So Mary’s line was not affected by the Jeconiah problem in the first place, and it is a moot point in the second place, proven by Jeremiah’s own prophecy.

But getting back to the beginning, Luke clearly lists a different heritage going through David’s son Nathan, rather than through Solomon, as Joseph’s line went. Luke’s words have stood the test of time in many areas that are beyond the scope of this subject. We should have no problem standing by his words here.

The Book of Zechariah begins in the first verse with the word of the Lord coming to this prophet in the eighth month of the second year of Darius’s reign. This is October/November of 520 B.C., and places it between Haggai 2:1 and 2:10. Zechariah was a priest. The text tells us that he was the grandson of Iddo, who was one of the Levitical priests that came back from Babylon with Zerubbabel, the grandson of king Jehoiachin (Nehemiah 12:1-4).

Zechariah is sometimes referred to as the prophet of hope. The people had been back from captivity for twenty years. Taxes were high, especially in light of Darius’s preparations for his campaign against Egypt. Jerusalem was far from restored – in fact, the people felt like they were nothing on the world’s “stage.” The temple foundation had been started shortly after their return, but the effort had stalled due to opposition. Discouragement ruled the day, and the only thing to do seemed to be to just try to get by in the best ways that one could.

The first six chapters are a series of eight night visions that we could spend several pages discussing. They are a combination of reassurances of God’s favor for His people and of Messianic promise – restoring the covenant and the house of David. Chapter 7 takes up two years after these night visions, dealing with all of the fasting that the people are doing. The Lord has not commanded them to do so much fasting. What He wants from the people is for them to return to faithfulness and live by His commandments.

Concluding with chapters 9-14, various future events are addressed – at the forefront are God’s coming judgment on the nations that oppressed them and much emphasis on the coming Messiah. There is much encouragement in these chapters, but also warning – God has had more than enough of idolatry and wicked leadership! The future looks good indeed, but it depends on their faithfulness. 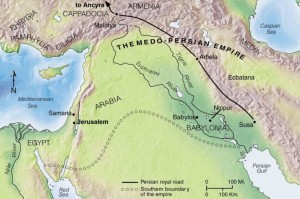