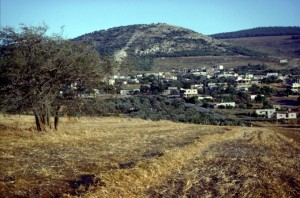 The city of Nain mentioned in Luke chapter 7 is generally assumed to be where the small village of Nein is located, although the remains that have been uncovered suggest that Nain was much larger – more like the city that was mentioned by Luke. It is a short distance from Mount Tabor at the foot of a hill known as the “Little Hermon.” Luke says that it was soon after the healing of the Centurion’s servant that Jesus set out headed for the city. He had His disciples with Him, and a “great crowd” was following with Him as well. Just how large this group of people was, we do not know. But usually, when the Gospel writers spoke of a “great crowd,” it meant a very significant number of people (see below).

A man had died, and was being carried out of the city as they approached the gate; and there was what Luke describes as a “considerable crowd” (reasonable to assume that the “considerable crowd” was smaller than the “great crowd”) with her. Presumably, they were on their way to the burial-place for the man. In verse 13, Luke says that Jesus had compassion for her, as the woman wept for her lost son.

Being a widow and then losing a son meant much more than just a deeply sad feeling of loss for a woman of those times. Women of the day had little opportunity for earning income of their own. There were no social programs for her to rely on for financial support, of course. So not only was she suffering the loss of dear loved ones, but she was facing a very uncertain future, and financial hardship was certain to be a major concern.

As Jesus told her not to weep, he came up and touched the bier. A bier was a wooden platform on which a coffin was transported. Today, funeral homes usually move coffins around with a collapsible metal or aluminum bier. As He did so, all of those in the procession stood still. And then Jesus spoke to the dead man, telling him to arise. Imagine yourself for a moment, walking with such a procession to go to the burial of someone you knew when their lifeblood flowed, and hearing a stranger address the dead person, telling him to get up. Then imagine that dead friend actually raising up and start speaking to his pallbearers. Luke says in verse 16 that “fear seized them all.” I have no doubt that it did!

Then they all glorified God. It wasn’t hard to figure out that this had not been some parlor trick, and there was none other to attribute this miracle to but the Almighty Himself. Of Jesus they said “a great prophet has arisen among us!” and “God has visited his people!” Not surprisingly, verse 17 indicates that this “great crowd” spread the word about this miracle throughout Judea and the surrounding country. And what a celebration the widow, her son, and their friends and family would have that day! I sometimes wonder how many of the people like this that we read about became Christians after Jesus was crucified?