The parable Jesus told about “the Good Samaritan” is probably the best known of all of His parables. Admittedly, most people probably don’t really know the story, but even those who wouldn’t know a Bible from the Encyclopedia Britannica at least know what people mean when they talk about someone acting as a “good Samaritan” today. It is such a great parable for many reasons, but perhaps it is so famous because it shows the best side of a person that maybe had reason not to act as they did.

The story is told by Jesus to many who were present, but it was in answer to a certain lawyer’s questions. The context might make one wonder if this lawyer was one of “the seventy” who had just returned. But this was another time on the journey Jesus was on, and his attitude does not fit with those Jesus had just described as having their names “written in heaven.”

He had put Jesus to the test in verses 25-28, asking what the greatest commandment was when he already knew the answer, which he quoted from Deuteronomy 6:5 and Leviticus 19:18: “You shall love the Lord your God with all your heart and with all your soul and with all your strength and with all your mind, and your neighbor as yourself.” But then “desiring to justify himself,” he asks Jesus “who is my neighbor?”

What seems clear is that the lawyer wanted to apply the word neighbor in its most narrow sense. He certainly could not be expected to love everyone! But just how broadly should he apply it? This has given me pause to wonder how many times I have had this attitude myself. If I am to be truthful, it has happened many more times than I would like to admit.  That is the point Jesus was making to me, and others like me, in this parable. The man “going down” from Jerusalem was obviously a Jew. The Jews and the Samaritans in those times did not get along well. Refer to the woman at the well in John 4:9, who asked Jesus “How is it that you, a Jew, ask for a drink from me, a woman of Samaria?” When the Israelites were taken captive by the Assyrians, the king brought foreigners from various places into the land, who inter-married with the Israelites that had been left behind (2 Kings 17:23-24). These Samaritans were considered “unclean,” and Jews would have nothing whatsoever to do with them.

The man from Jerusalem in the parable was beaten and robbed and left for dead. First a priest, and then a Levite pass this dying man on the side of the road without stopping. The Samaritan knew that this Jew (under other circumstances) might not give him the sweat from his brow even if he was dying of thirst. Yet he stopped, dressed his wounds, carried him to safety and went to considerable expense to see that he was cared for.

When Jesus told the lawyer “you go and do likewise,” He was speaking to me. That kind of love and care for even a stranger is what my Lord expects of me, and what, I know, I have not yet truly learned. But I am working on it. And just maybe with His help, I’ll get there. 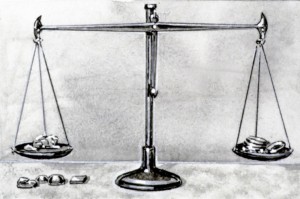 A drawing of balances, or scales, of Bible times. A standard weight was placed on one side, and the object or objects to be weighed were placed on the other side.

Psalm 10 is often considered to be an acrostic continuation of Psalm 9, and differences aside there is some merit in that view beginning with the fact that the psalmist in chapter 10 recounts the deeds of the wicked and speaks of his denial of God (verse 4) in the third person.  And he reminds us that the wicked who oppress the poor will “be caught in the schemes that they have devised”. – always an abomination to the Lord.  God has always cared deeply about the poor (Micah 6:9-11, Leviticus 19:9-11).

It is not the psalmist himself that believes the wicked will continue to prosper forever, nor that God himself does not know , for he says of their attitude in verse 11 “He says in his heart, ‘God has forgotten, he has hidden his face, he will never see it.'”.

But God does see and he will mete out his vengeance one day, just as HE has before in His own time”

“O Lord, you hear the desire of the afflicted;
you will strengthen their heart; you will incline your ear
to do justice to the fatherless and the oppressed,
so that man who is of the earth may strike terror no more.”