In chapter 14, Jesus feeds the 5,000, and later walks on water. Two very miraculous events. But the chapter begins with the death of John the baptist.  After his disciples buried the body, they went and told Jesus, who “withdrew from there in a boat to a desolate place by himself.” The crowds would not allow Jesus to have this time to Himself. But it is a reminder to us that it is human and natural to mourn. When we or someone that we love feel a need to grieve, it is OK. We need that time, and God understands. In chapter 15, Jesus goes by the Sea of Galilee healing more in verses 29-31.  Verses 32-39 detail the feeding of the four thousand – this was just the number of men, not including women and children.  This numeration, as well as that of the feeding of the five thousand could be an indication of what sort of size crowds the scripture speaks of in other places.  All were fed and satisfied with just seven loaves of bread and a few fish, and the seven baskets of food gathered up afterward seems to represent more than what they even started with.

The eighth chapter of Luke lists several of the women who had become disciples — some of which, we know will be there for the crucifixion and to see the empty tomb. He calms a storm, heals Jairus’ daughter and another woman, casts out a demon, and tells the disciples the parable of the sower, as well as the purpose of the parables. In verses 16-18, he follows up on the previous verses about hearing the word, and holding it up in a good and honest heart:

No one after lighting a lamp covers it with a jar or puts it under a bed, but puts it on a stand, so that those who enter may see the light. For nothing is hidden that will not be made manifest, nor is anything secret that will not be known and come to light. Take care then how you hear, for to the one who has, more will be given, and from the one who has not, even what he thinks that he has will be taken away.

In chapter 9, Jesus sends out his 12 apostles to preach the gospel, and verses 10-17 contain Luke’s account of the feeding of the 5,000. The chapter is 62 verses long, and also contains the account of the transfiguration – as well as Jesus foretelling his own death twice. But for this post, we will look briefly at verse 23, where Jesus is speaking to the disciples and says “If anyone would come after me, let him deny himself and take up his cross daily and follow me.” This is a commitment that disciples, then and now, don’t always take seriously.  Being a follower of Jesus is a daily exercise. It is more important than our jobs and (as he emphasizes in verse 62) anything else in our lives on earth.

Luke, ever the accurate historian as has been proved time and gain, correctly refers to Herod Antipas as Herod the tetrarch in verse 7 of chapter 9. By this time, Herod has already had John the baptist beheaded, yet these stories of Jesus keep coming to him; and some people were saying that He was John – raised from the dead. Others said He was Elijah, and still others said that He was another one of the prophets. Verse 9 has Herod reassuring himself, but he resolved to meet Jesus face to face. One cannot help but wonder if guilt on Herod’s part has also placed some fear in his heart.

Luke’s account of the feeding of the Five Thousand

Meanwhile, Jesus’ apostles returned from the mission He had sent them on, and reported to Him all that had happened while they were gone. Jesus took them and went to Bethsaida, a town just east of where the Jordan River flowed into the Sea of Galilee. As usual, word spread quickly among the crowds, and they followed them. Jesus preached to them about the kingdom of God and healed those who needed healing among them.

The miraculous feeding of the 5,000 occurred on the shores of the Sea of Galilee near Bethsaida.

As the end of the day was coming close, the apostles became concerned for the people, coming to Jesus to dismiss them, so they could find food and a place to stay. But Jesus told the apostles to feed them. Having only a couple of fish and five loaves of bread, they protested the impossibility of feeding five thousand men and all of the women and children as well. Having them sat in groups of about fifty each, he blessed the food, looking toward heaven.  Everyone ate until they were satisfied, and twelve baskets full of broken pieces were taken up afterward.

We are not told why Jesus had them separated into groups of “about fifty,” and speculation about that is futile, since the whole thing was miraculous anyway.  But one might wonder what the apostles saw, as they made sure that the food was passed around throughout what would have to be well over 100 of these groups of people. We cannot know how it all unfolded, but let’s try for a minute to just imagine what it could have been like.

When Jesus broke the loaves, He must have given portions to each of the twelve apostles. One can only imagine their sense of foreboding as they handed their portion off to the first group – no doubt expecting it to run out long before reaching the last of the fifty people in their first group. When that did not happen, and as each of the twelve transferred the food from one group to another, did they see the amount of food undiminished in quantity or was it gradually growing? It seems likely that the latter would be the case.

Imagine that sense of dread they felt initially turning first to surprise, and then to amazement. It is easy to imagine then that the excitement would build into a giddy and festive atmosphere that would be contagious to these crowds!

Here, we have another account of Jesus returning to His hometown.  Verse 5 simply means that their lack of faith prevented him from doing many mighty works.  Indeed, His own family had already believed him to be out of His mind (Mark 3:20-21).  In verses 7-13, He sends out the apostles, giving them authority over the unclean spirits, and to heal. 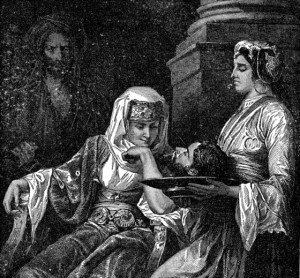 In verses 14-16, we find Herod Antipas leaning toward the belief that Jesus must be John the Baptist raised from the dead – perhaps because of fear from his own guilt in John’s death.  Verse 17-29 detail the death of John the Baptist, as his pronouncement of lawlessness on Herod’s part (he had committed adultery by marrying his brother Philip’s wife, Herodias) cost John his life in an ugly and inhumane act of murder (verses 27-28).

Verse 30 takes up when the apostles return to Jesus, and tell Him all that they had done.  He takes them to a “desolate place” by boat to get away from the crowds and to rest.  But people were already waiting for them when they came ashore.  In verse 34 He “had compassion on them, because they were like sheep without a shepherd,” and began teaching them.  The disciples wanted to send them away so they could eat, but Jesus told them that they would feed them.  This time, there were five thousand men, plus women and children, and they fed them with five loaves of bread and two fish; and they took up twelve baskets full when everyone was full (verse 43).  Two hundred denarii in verse 37 was about 200 days worth of a laborer’s wages.

Jesus sent His disciples ahead to Bethsaida by boat, as He dismissed the crowds and went up to the mountain to pray.  But they were making their way “painfully” because of the wind, and Jesus began walking out to them on the water about the fourth watch (between 3:00 and 6:00 a.m.).  When they saw Him, they thought it was a ghost, but He told them not to be afraid – “it is I.”  As He got in the boat, the wind ceased.  Mark explains that the hardness of their hearts kept them from seeing who He really was, despite the miracle of the loaves or seeing Him walk on the sea with their own eyes.

Verse 53 seems to indicate that the wind had taken them southwest of Bethsaida to Gennesaret.  As He came to the villages, cities and countryside, word had spread of His arrival; and people brought the sick to Him.  “On their beds” in verse 55 would indicate some gravely ill people being brought.  Contrast verse 5 with verse 56.  Many just wanted to touch the fringe of His garment, believing that would heal them.  That faith made it so.