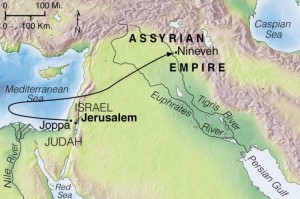 God told Jonah to go to Nineveh, the capital of the Assyrian Empire. Many of Jonah’s countrymen had experienced the atrocities of these fierce people. The last place Jonah wanted to go was on a missionary trip to Nineveh! So he went in the opposite direction. He boarded a ship in Joppa that was headed for Tarshish. But Jonah could not run from God.

Jonah was a prophet during the reign of Jeraboam II around 750 B.C. According to 2 Kings 14 23-28, he was the son of Amittai, hailing from Gath-hepher. Gath-hepher (meaning “winepress of the well”) was on Zebulun’s border in ancient Israel. The Book of Jonah has been the subject of some debate and there are those who consider it allegory. But such is not the case. Jesus certainly spoke of the events of the book as historical fact; and Jonah’s adventure is mentioned in Matthew 12:38-41, 16:4, Luke 11:29-32, among other passages.

As for the most famous part of the book, many are quick to point out that the Bible does not say that it was a whale that swallowed Jonah. God in fact, it says, appointed “a great fish” for the deed. The truth is that the taxonomies we use today for classifying such creatures did not exist in their present form, so the distinction between fish and mammals is purely academic and relevant only today. True enough, a creature other than a whale could have been responsible (one such suggestion is a “Sea Dog”). And there have been reports in the past of people surviving after having been swallowed and regurgitated by such. One such incident was reported in “The Boston Post-Boy, October 14, 1771” about a man named Marshall Jenkins (see this article on Christian Evidences) It hardly matters. In any event, it was a miraculous feat completely orchestrated by God for a specific purpose – just as that of the worm (Jonah 4:7).

But this miraculous event aside, the most important aspects of the Book of Jonah lay elsewhere. The Book of Jonah shows us God’s boundless compassion in multiple ways. Any time the early Christians of the first century began to question whether Gentiles were to be part of God’s plan of salvation, they needed only to look at this book. God sent Jonah to give His message to the Ninevites to give them the chance to repent. They were not part of Israel by any stretch of the imagination. But God cared about them, just as He tried to teach Jonah in Jonah 4:1-10.  In God’s eyes, everyone is worth saving.

Jonah sat under a goard vine, waiting and hoping for God to destroy Nineveh. But God taught him an important lesson about forgiveness through the vine (Jonah 3-4).

Jonah’s attempted flight from God shows us a couple of things. First, and most obviously, we cannot hide anything from our Creator. Even the “smallest” of our deeds is known to Him. Secondly, as is shown repeatedly in scripture, when God wants something done, it gets done. He sent His only son to sacrifice His life for us, and establish His kingdom. The misunderstanding some have that Jesus somehow failed at that the first time, but will try again later, is ridiculous.

Finally, Jonah’s attitude and God’s reaction in chapter 4 should give us pause to think about our own compassion for our fellow man. How often do we view others with disdain or even contempt? How concerned are we really about salvation for those outside God’s kingdom? Have we truly committed ourselves to Christ if we are not willing – yes and even eager – to help others to work out their salvation?

Though only 4 chapters, the Book of Jonah is a powerful and important book of prophecy and teaching. Do yourself a favor and read these 47 verses if you have not done so in a while – and do so with these things in mind. It will enrich you in your walk with the Lord.