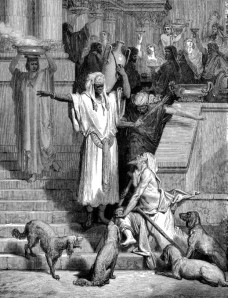 Lazarus at the rich man’s gate.

Jesus begins the story of the rich man and Lazarus in verse 19. For the record, Lazarus was a fairly common name, and it is mere coincidence that he has the same name as the brother of Martha and Mary, who Jesus raised from the dead in John 11:38-44. That Lazarus was a real man, and a friend to Jesus. This one is a character in a parable. Lazarus, a poor man who was covered with sores, had a habit of posting himself at the rich man’s gate, hoping to get a few scraps from the rich man’s table. The significance of the dogs that came and licked his sores is that he was exposed to the elements, and to wild animals. These were not AKC registered pets.

Lazarus died, and was carried by the angels to Abraham’s bosom. Then the rich man died was buried, and was in Hades in torment. He asks Abraham to send Lazarus to dip his finger in water to cool his tongue. Significantly, he still had no regard for the poor man, but looked on him as someone to serve him. But Abraham told him that their roles were reversed now. The poor man, who had known nothing of comfort was receiving his comfort now, in contrast to the anguish of the rich man. Abraham also pointed to a chasm that separated them, so that neither could cross to the other side.

Lazarus, not the brother of Mary and Martha, but another man by that name, was very poor. He lay near the table of a rich man and begged for scraps of food to be thrown to him. But Lazarus loved God and the rich man didn’t, so Lazarus went to heaven and the rich man went to hell (Luke 16:19-31).

The rich man then asks Abraham to send Lazarus to warn his brothers, so that they will repent, reasoning that they will listen to someone who was raised from the dead. But Abraham said that if they will not listen to Moses and the prophets, they will not be convinced even by someone being raised from the dead. That is just so. Jesus Himself had been witnessed by some after He arose that also were not convinced to repent. There is a mistaken belief by many that the eyewitness of a miracle would convince an unbeliever, but we see over and over again in scripture that this is simply not true. Many of the Pharisees witnessed great miracles, and still plotted the death of Jesus. Those who are stoically predisposed not to believe will find an explanation within themselves that will reinforce their unbelief.

We must be careful about the descriptions of the circumstances of the rich man and Lazarus after they died. Remember that this is a parable. That does not mean that there are not aspects that can be equated to what the reality will be. But the clear picture we have seen in paintings and illustrations of this dividing line between the two probably does not accurately tell that story. The point is that the comfort and security that belongs to those who are saved will be totally unavailable to those who are lost.

Significant also is the fact that Abraham offers no hope at all to the rich man. That is because for those in that situation, there will no longer be any hope. Man has his entire life to act as a child of God. Once that life is done, the opportunity ends. A terrible tragedy, but one of which we have been repeatedly forewarned. If we do not believe it enough to obey, that is our own fault.

The love of this rich man for money and his ignoring the plight of this poor man so plainly close and available to easily be helped by his great wealth illustrates very well the lesson Jesus taught in the parable of the dishonest manager that this chapter opened with. His downfall was his love of money, at the exclusion of what is important. No man can serve God and money.