The “Parable of the Unjust Steward” (in some translations, it is the “dishonest manager”) is admittedly difficult to understand at a certain point. It is obvious to any honest 🙂 person that Jesus does not suggest that dishonesty is “commendable.” But the way that verses 8 and 9 are translated makes it difficult to precisely get the full meaning.

The steward or manager in question likely refers to a chief servant of a rich man’s household. He has been trusted with running the day to day affairs of the house, which include the buying and selling of goods produced by the land. Charges of waste by either incompetence of dishonesty (or both) are brought, and no denial is made. Instead, the steward (who knows he is losing his job) plots how he might make friends of those who are indebted to the lord of the house. 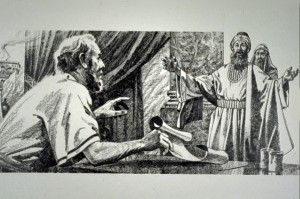 In one of Jesus’ parables, an unjust steward was fired from his job. But he was shrewd, so he quickly called in his master’s debtors and reduced or canceled their debts, so that he would have new friends (Luke 16:1-18).

The steward conspires with several debtors to “cook the books” on each end, so that they will owe less money – reasoning that helping the debtors in this way will secure their good graces for himself in the future. Obviously, the debtors who went along with such a scheme were just as guilty as the steward.

The parable seems pretty straightforward up to that point. Then in verse 8, the lord of the house (having discovered the scheme) “commends” the steward for his shrewdness. It is pretty easy as well to understand this as a “I’ve gotta hand it to you” type of commendation. We are all smart enough to know that the lord of the house is not offering praise of approval to the man for stealing from him! The verse continues with Jesus’ own words: “For the sons of this world are more shrewd in dealing with their own generation than the sons of light.”

Then comes the difficulty in verse 9:
“And I tell you, make friends for yourselves by means of unrighteous wealth, so that when it fails they may receive you into the eternal dwellings.” 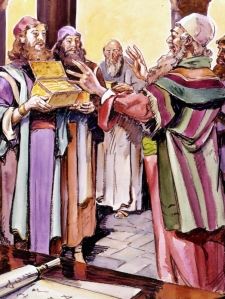 The parable of the talents, a story about faithful stewardship — Matthew 25: 14-30.

We have read many commentaries that offer various explanations of this verse. Some are quite awful, frankly. One of the better ones says that this is sarcastic irony. There may be some validity in that analysis actually. But the most correct analysis (in our opinion) is that, properly translated, the verse fits into a rhetorical question. Some have pointed to this by such things as the combination of a subjunctive verb along with a future indicative verb in the Greek. We confess to being largely illiterate when it comes to Greek. But change the wording accordingly to “should you make friends for yourselves by means of unrighteous wealth, so that when it fails they may receive you into the eternal dwellings?” and it makes perfect sense.

Obviously, the answer is no. Jesus would certainly NOT want us to make friends by using unrighteous wealth. This holds true even if you hold that “unrighteous” in this case simply refers to all material wealth, and that it doesn’t mean anything bad. Making friends with wealth is not going to get you into any eternal dwelling!

The point is missed by most commentators. This is not really a lesson about wealth. Neither is it about prudent handling of your worldly affairs (the steward was a thief)! Nor is it specifically about making prudent preparations for your spirituality. It is about honesty. And it is about where, and to what (or whom) your heart belongs.

Jesus explains that very well Himself after the parable: