In verse 37, Jesus comes down from the mountain after the transfiguration, and is again met by a crowd. But there was a man there whose son had been possessed by a demon since early childhood. This account is in all three synoptic gospels (Matthew 17:14-20, Mark 9:14-29), and reading them all helps to clarify. The symptoms the boy had have led some to conclude that he had epilepsy, but that is clearly not the case. And we certainly know that Jesus would know the difference between a disease and this demon. 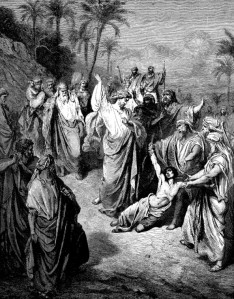 Christ healing a boy with a demon

This one is evidently a singularly malevolent demon, and the man tells Jesus that His disciples had been unable to cast it out. In verse one, we are told that Jesus “called the twelve together and gave them power and authority over all demons.” So Jesus’ remarks about faith are on target. In Mark, he tells them that this kind can only be driven out by prayer. It is the building of their faith through prayer that would have made the difference; and this is a point that Mark’s account expounds on. We may never have enough faith to move mountains, but together with the power Jesus had given them, His apostles certainly had it within reach!

As the disciples were excitedly regarding all these things He had done, Jesus again talks about His impending death, saying “Let these words sink into your ears: The Son of Man is about to be delivered into the hands of men.” As Jesus well knows, they aren’t getting it. And the next verse lets us know that they are not supposed to “get it” yet really. Verse 45 says “But they did not understand this saying, and it was concealed from them, so that they might not perceive it. And they were afraid to ask him about this saying.” All of this would come together for them after Pentecost.

It is nearly comical that just after their failure of faith, the disciples begin arguing about which of them is “the greatest.” They do not yet understand what Jesus’ true mission is, nor what is to become of Him. They only imagine how prominently they will fit into His kingdom. The child He brings by His side in verse 47 illustrates that having proper regard for one so small in stature and station is akin to having regard for Jesus – and thus for God. Therefore, He tells them, whoever is “least” among them is the greatest. The meaning here is of being least in regard for one’s self. Putting one’s self last and others first is the message Jesus has hammered home again and again.

“No one who puts his hand to the plow and looks back is fit for the kingdom of God.” Luke 9:62

Jesus was rejected on the next part of their journey by a Samaritan village because “his face was set toward Jerusalem” (Jews and Samaritans had little regard for each other). The disciples wanted to cause  “fire to come down from heaven and consume them,” which again is almost comical considering recent events. One gets the idea they were becoming a bit “puffed up.” Jesus, of course, rebukes them for even asking such a thing.

Verses 57-62 speak of some who wanted to follow Jesus but had other matters to attend to. Jesus’ answers to them reflect the fact that He must move quickly, and much is left to do. This meant that those who would be physically following Him must make doing so the singular priority in their lives right away, due to that urgency. Now, we are not expected to fore-go even attending our parent’s funeral in order to serve the Lord. But the application to our lives is nonetheless clear. Once we become Christians, that commitment in our lives trumps everything.