In 1 Chronicles 11, all of the elders of Israel come to Hebron to meet with David following the death of Saul, and David is anointed king “according to the word of the Lord by Samuel” (1 Samuel 16:6-13). Then in verse 4, it immediately picks up with David and his troops going to “Jebus,” which is Jeusalem – which is occupied by the Jebusites. We are first told that the land of the Jebusites is Jerusalem back in Joshua 15:8, where the boundaries for the tribe of Judah are laid out in detail, as the Promised Land gets divided among the tribes. It is during this successful campaign upon what will become “the City of David,” that “Joab the son of Zeruiah” becomes commander of David’s army. This is because he took David up on his offer to make chief of the one who strikes first at the Jebusites. 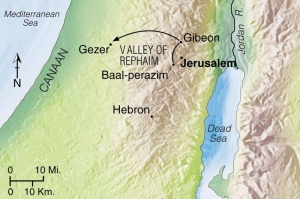 Beginning in verse 10, the chronicler introduces David’s “mighty men,” which we will read more about in chapter 12. There is some debate about the number (some count 37 as being named here). But generally, it seems that the main group of his mighty men were referred to as “the thirty,” and at same point, this number becomes a name for them despite the actual number (just as the apostles were referred to as “the twelve”). However, although there were those in the thirty that were regarded as “chiefs,” and greater than the others, there were three that were very special. Of the three, the foremost was Jashobeam, who is listed again in 1 Chronicles 27 as leader of a military division. It is supposed that as members of “the thirty” died, they were replaced with others, which made this an evolving list.

In verses 15-19, as the Philistines were camped in the Valley of Rephaim, their garrison was at Bethlehem. David remarked that he would love to have water from the well at Bethlehem. When three of the mighty men broke through the camp of the Philistines and brought back the water to David, he poured it out as an offering to the Lord – refusing to drink something obtained by such bravery by his men.