After arriving again at Lystra, Paul wanted a disciple there named Timothy to come with him.  Some wonder why Paul chose to circumcise Timothy, but clearly states in Galatians 2:3 that Titus was not circumcised.   The answer is that Timothy, before becoming a Christian, was raised by a Jewish mother (though his father was Greek).  So, as verse 3 says, it was because of the Jews in those places.  Having an uncircumcised Jew with him could pose a distraction by having some focus on that fact rather than the important teaching of Jesus Christ. 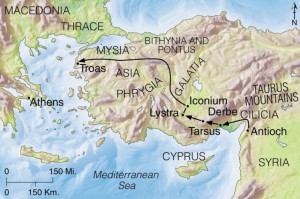 Paul and Silas set out on a second missionary journey to visit the cities Paul had preached in earlier. This time they set out by land rather than sea, traveling the Roman road through Cilicia and the Cilician Gatesa gorge through the Taurus Mountains, then northwest toward Derbe, Lystra, and Iconium. The Spirit told them not to go into Asia, so they turned northward toward Bithynia. Again the Spirit said no, so they turned west through Mysia to the harbor city of Troas.

As they went along, the brethren at various places were encouraged by the relating of the events of the Jerusalem Conference.  In verse 6, as they passed through the region of Phrygia and Galatia, it says that they had been forbidden by the Holy Spirit to preach the word in Asia.  This is not a reference to the continent of Asia, but to a Roman province in what was called Asia Minor – Ephesus being the capital.  For whatever reason, the people there were not ready to receive the word yet.  The same was true of Bithynia in verse 7, as they went through Mysia to Troas.  Then Paul had a vision of a man telling him to come to Macedonia to help them.

In verse 10, Luke speaks for the first time in the first person plural – “we sought to go on into Macedonia, concluding that God had called us to preach the gospel to them”  – from which we can conclude that Luke had been preaching the gospel for a while already, as he includes himself with Paul, Silas and Timothy.  So they set sail to Philippi, a leading city in Macedonia.  There was no synagogue there, so on the Sabbath they found women gathered for prayer by the river.  One was “Lydia, from the city of Thyatira, a seller of purple goods.”  These goods would have been made from an expensive dye made from the murex shell.  Note that Luke says that God opened her heart to pay attention to what Paul said, and she was baptized.

After Paul drove the demon from the slave girl in verses 16-18, her owners drug Paul and Silas before the magistrates with false accusations.  In verses 20-22, they were beaten with rods and put in jail.  Paul and Silas prayed and sang hymns while the other prisoners listened until an earthquake shook the prison, opening the doors and freeing the bonds.  The jailer, readied to kill himself as he supposed they had escaped.  But Paul stopped him, and he and his family were all baptized. The magistrates sent the police the next day, telling the jailer to let them go, but Paul declared his Roman citizenship, and practically demanded an apology  – which he ended up getting, as the magistrates were then afraid.   They were asked to leave the city, though, so they visited and encouraged Lydia and the brothers before leaving.

Side note: This article at Ferrell’s Travel Blog has a unique photo and a bit of information about Philippi.