The book of Acts just continues to present us with such momentous occasions; and chapter 10 is clearly one of special significance.  Cornelius of Caesarea was a Gentile soldier of an Italian cohort.  a cohort could consist of from 600 – 1000 men, with 6 centurions in charge.  A centurion was paid anywhere from 5 to as much as 20 times as much as the average Roman soldier, so Cornelius was likely considered wealthy.  Identified in several verses as a God-fearer, he would have been attached to a synagogue and a believer in God, but not circumcised.  An angel came to him in a vision telling him to have Peter brought to him, as well as where to find him.

Joppa, today called Jaffa, was once the seaport for Jerusalem. Hiram sent cedar logs from Lebanon to King Solomon for the Temple, floating them to Joppa (2 Chronicles 2:15). From Joppa the prophet Jonah ran away from God ( Book of Jonah), sailing from there toward Tarshish. Here Peter raised Tabitha, or Dorcas, from the dead (Acts 9:36-42). Later he was staying here at the house of Simon the Tanner when he saw a vision of unclean animals, which led him to visit Cornelius’ house in Caesarea and win him to Christ. This is the traditional site of the home of Simon the Tanner.

Meanwhile, on the housetop at the home of  Simon the tanner, Peter had a vision of his own (verses 9-16) that was perplexing to him at first.  The vision occurred three times of all sorts of animals descending from heaven that he was commanded to eat – some of whom were unclean by Jewish law.  Peter argued at first, but the voice said to him “What God has made clean, do not call common.”  Peter would come to understand that this landmark vision was not referring just to animals and food, but also to men.  While he was still sorting through this, the Spirit told him about Cornelius’s men who were now at his gate – that he was to go with them.

Being led by the Spirit, Peter judiciously took some of the brothers with them for witnesses of what was to occur.  When they arrived from Joppa into Caesarea, Cornelius had gathered his friends and family and fell at Peter’s feet.  Whatever was in Cornelius’ heart, Peter knew it was wrong to allow that sort of worship, and rebuked him in verse 26.  In verses 28-29, Peter acknowledges that under Jewish tradition, coming to the house of a Gentile (let alone, eating with them) would make one ceremonially unclean, but says that God has told him that he “should not call any person common or unclean.”  So, he asks why Cornelius has sent for him. 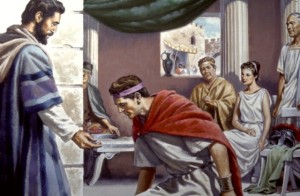 So Cornelius tells him of his vision and that all present were commanded to hear what Peter has to say.  With that, Peter preaches to them about Jesus and forgiveness of sins through His name.  It was then that the Holy Spirit fell upon all present.  The baptism of the Holy Spirit had previously been done directly from God to only the apostles, with it given to others only through the apostles laying on hands.  But now, to the amazement of all circumcised believers who had come with Peter (verse 45), this second baptism was being poured out even to Gentiles.

Peter, acknowledging the gift that was given to them, then commanded that they be baptized with water as well.  Peter’s perspective had changed forever concerning non-Jews.  Now the Lord’s Kingdom would grow even faster!  But this new perspective would not come without some resistance to change.