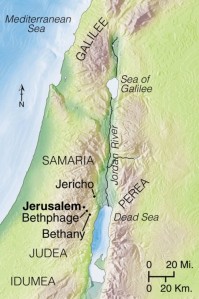 As Jesus approached Jerusalem by way of Bethphage and Bethany, He sent two disciples to get a colt for Him to ride on – fulfilling Zechariah 9:9.  Jesus tells them where it will be and what to say when someone asks why they are untying it (including that it will be returned immediately).  On the way, He is hailed as the Messiah (verses 9-10).  “Hosanna” in verses 9 and 10 comes from an expression found in Psalm 118:25 (“Save us, we pray, O Lord”), which when translated into Greek becomes “Hosanna.”  In verse 11, He entered the Temple in Jerusalem, just to look around, then they left for the day.  When He returned the next day, He would again cleanse the Temple, driving out the money-changers and those who sold animals.  Verse 17 quotes both Isaiah 56:7 and Jeremiah 7:11.

The following day, He saw a fig tree in leaf, even though it was not the season for figs.  But the leaves were an outward sign that promised fruit.  Yet there was none.  The analogy of this to God’s people is hard to dispute.  So Jesus declared that no one would eat fruit from it again; and in verses 20-21, His disciples saw that it withered  to its roots.  Verses 23-25 do not mean that everything we want will be given to us if we pray with enough faith.  We must remember what the scripture says about motives in prayer (James 4:3), and about praying according to God’s will (1 John 5:14). 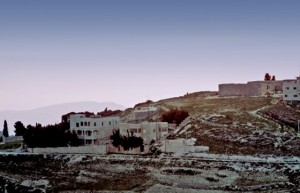 Bethphage area, on the eastern slope of the Mount of Olives, near Bethany. This was on the way from Jerusalem to Jericho.

The chief priests, scribes and the elders all come to challenge Jesus, demanding to know what gives him the authority to do the things he is doing.  He cleansed the Temple of what was going on right under their noses.  But more than that, the question also seems to be of a general nature, in order to strengthen their case against Him.  His refusal to answer unless they told Him by what authority John the Baptist had baptized was calculated, as He knew they would not answer (verses 29-33).  By saying that the baptism was of man, they would anger the crowds who believed John to be a prophet.  But if they said it was of God, they would be admitting that John spoke the truth when he said that he was the one preparing the way for the Messiah (John 1:23 and Mark 1:7-8).