Verses 1-20 deal with the miraculous birth of Jesus.   The circumstances of His birth, the lack of great wealth on the part of His parents, and even the people who this scripture places with Him all point to a King that was not just for the favored few.

The Roman emperor Caesar Augustus was born about 62 BC, and reigned from about 32 BC until his death in about 14 AD.  Joseph and Mary had gone to Bethlehem (the city of David, of whose lineage Joseph was descended) from Nazareth because of a decree by Caesar Augustus that all subjects of the Roman Empire must be registered for the purpose of taxation.    Of course, had there been no such decree, something else would have brought them there anyway because God’s prophets had already told us that the Messiah would be born in Bethlehem (see Micah 5:2).  Verse 7 says that Mary “gave birth to her firstborn son and wrapped him in swaddling cloths and laid him in a manger, because there was no place for them in the inn.”  Those were the signs that the angel of the Lord, who appeared to some shepherds, told them to look for when they went to see for themselves (verses 8-13). 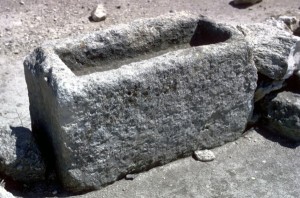 Stone manger from Bible times, perhaps similar to the one that cradled the baby Jesus in Bethlehem. The manger held food for animals.

At the end of eight days, he was circumcised (according to God’s commandment to Abraham in Genesis 17:12); and named Jesus – just as Mary had been told before He was conceived (Luke 1:31-32).  Verse 22 would be 33 days later in which they would have journeyed to Jerusalem (Leviticus 12:3-8) to make their sacrifice according to the Law given to Moses.  Joseph and Mary would not have the means to offer a lamb, but would obey the Law of the Lord.  We do not know anything else about the man Simeon in verses 25-35.  The scripture says that the Holy Spirit had revealed to him that he would see the Christ before he died, so he had obviously found favor with God.  As he held the savior in his arms, his words affirm that verse 10’s reference to “all people” means Jews and Gentiles alike as, in verse 32, he calls Jesus “a light for revelation to the Gentiles, and for glory to your people Israel.”  Verses 36-38 recount more of God’s revelations about Jesus to his humblest of servants.  The family then returned to Nazareth, where verse 40 tells us that Jesus grew in wisdom and “the favor of God was upon him.”

Naturally, as verse 41 says, his parents returned to Jerusalem every year to observe the Feast of the Passover.  On the occasion of verse 42, he was 12 years old.  This may be about 7 AD, as the best estimates (contrary to what many people might assume), are that He was born about 5 BC.   It seems more than a bit strange to us that Joseph and Mary did not notice he had remained behind in Jerusalem until they well on their way back to Nazareth (verses 43-44), but we must remember that such a journey during an important festival would have had them traveling with a large group of family and friends that trusted and cared for one another.  When they returned to Jerusalem to search for Him, they finally found Him in the Temple – and as verses 46-47 say, amazing the teachers there.  He demonstrates that He already knows He is the Son of God, as He says in verse 49 “Why were you looking for me? Did you not know that I must be in my Father’s house?”